It's not easy being captain.

A short story-driven game about a space ship, it's crew and a difficult decision.

Due to security issues, the game is not able to retrieve the results in the end from the server. If you want to see them, please play the build available in there official Ludum Dare page or use the direct link here: http://artokoistinen.com/room44/

Theory: your the actual killer and all of the eject choices are correct

I guess that the whole point is that there's no right answer... I chose Fiona because it seemed unlikely that it could be her.

Clearly well-done. Although I do think that there's too few interactable objects and you could've included a menu with all the clues to easily read through them.

i chose kate, because she had complained about jack "sexually misconduct" i think it was, and she said that mack said he had stomach issues or something along the lines of that, but mack said he was going to confess, but not on the ship, but that also could just be mack being an idiot.

I really thought it would be the First Officer, but after seeing all the endings, I'm more confused. Was the answer that there is no right answer and that you have to rely on your analysis, or is everyone a killer including the Captain? Either way, this still is an awesome game and I had fun playing it!

This has to be one of the best games i've played in a long time, I loved the art style and the narrative, keep up the awesome work!!!

Thanks for making it video! It was awesome!

If you're interested, I also wrote a short post-mortem here: https://ldjam.com/events/ludum-dare/43/room44/room44-post-mortem

I liked the ending's ambiguity. At a glance the suspect could be where the clues are pointing to, but from my canon - it's the one that no-one suspects. 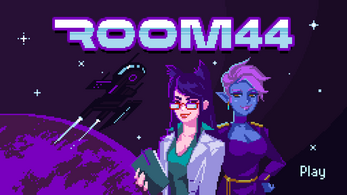 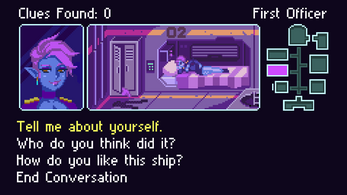 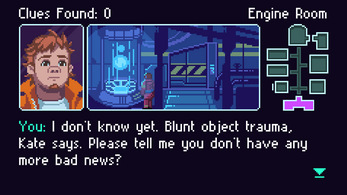